As featured in the IMAGO Zine #1 | FANsided. Get your copy via the link here.

“Fans of Toronto FC – young and old, raucous and restrained. Many are immigrants bringing their love of the game with them. The photos were taken at Toronto’s soccer-specific, 30,000-seater home and national stadium, BMO Field, which is usually sold out for games.”

“It is now the main sport for kids, both boys and girls. There are even leagues for 3 year olds and up! (Ice) hockey and (Canadian) football are seen as too dangerous and high cost  (equipment & training) and baseball is pretty boring (!). Soccer is played throughout the country and there is even a professional indoor team – MetroStars – who play in the North American Arena Football League.”

“The future is very positive – it has momentum. Soccer is the biggest sport, in terms of participation, in the country and crowds for the national teams and pro teams are excellent. ONE DIFFERENCE: Because of the size of the country/continent, there are very few visiting fans at games.”

“The club was formally registered as a citizens association on February 19, 2015, and play in the 7th division. The club brings football back to the common people and supporters, and is the first genuine local community football club in Croatia, governed by supporters with a clear stance against modern football, and with a direct-democratic organizational model. The club fights corruption on all levels, as well as all kinds of discrimination. The message is that football is a sport of solidarity, sound competition, respect for the opponent, a sport we love because of its simplicity and beauty.”

“The Cove is one of the oldest fan clubs and very well known. If you’re part of the Cove, you’re blood brothers! You can get tickets any time in all the other parts of the Stadium, but The Cove is for the die-hards.”

“I wanted to capture the guy with the loudhailer and some of the flags being waved. The Cove is quite a passionate bunch, and these photos capture everything for me. I was very happy with the photo of the guy in mid song with the loudhailer. It has the flare of the floodlights beaming back and it was an overcast day. A lot of my landscape work is with overcast skies. He is a pretty interesting character. He looks like he’s going to beat the crap out of anyone, but he’s actually quite funny and he has got some ironic songs, even when Sydney FC had a goal scored against them. He actually had his wife with him!”

“Football brings people together. In a country where there are harsh weather conditions especially over the winter you need a venue of some sort to get people together when summer comes around. Football is very successful in doing that here. I went to the Women’s match against Germany. We at Tólfan showed up with drums and the national stadium Laugardalsvöllur (9,800 capacity) was full for the first time. I was so proud of this moment because it shows you that this sport called football can break gender boundaries and so long as you keep up the standard of the game people will show up to see it.”

“Argentina, it’s a very difficult country, nice but difficult. Football let’s you be in another place, away from the problems you have everyday. It is a place to be with your friends, not only during the match, but before, eating Asado and drinking some wine.”

“In this division they are allowed to enter into the ground 2 hours before the match and they are not afraid to climb the fence to put up their flags. Club Atlético Excursionistas is an Argentine football club based in the Belgrano neighbourhood of Buenos Aires. The squad currently plays in the Primera C, the forth level of the Argentine football league system. It is a very humble club, which has spent most of its life in the fourth tier.”

“I tried to include some shots of fans as the game is nothing without them and their experience on game day is not something we always see, so it was exciting for me to actually experience that too. Artistically, I love the story it captures of passionate fans.”

“I tried to capture the key elements that are present in a Belgrade Derby between Red Star and Partizan, especially the colour and atmosphere. There is a name in Serbian for when a stand lets off multiple flares; it’s called a bakljada. The red smoke of the flares has a menacing feel; it really does something to the sky. The smoke is so thick, with all the faces behind it and the flags lined up along the stand at the bottom. It is a fascinating spectacle.”

Goal Click is a global project with the aim to connect communities and encourage self creation through first person perspective storytelling, sending disposable cameras to people around the world.

Goal Click is helping people understand one another through football with beautiful analogue photography. 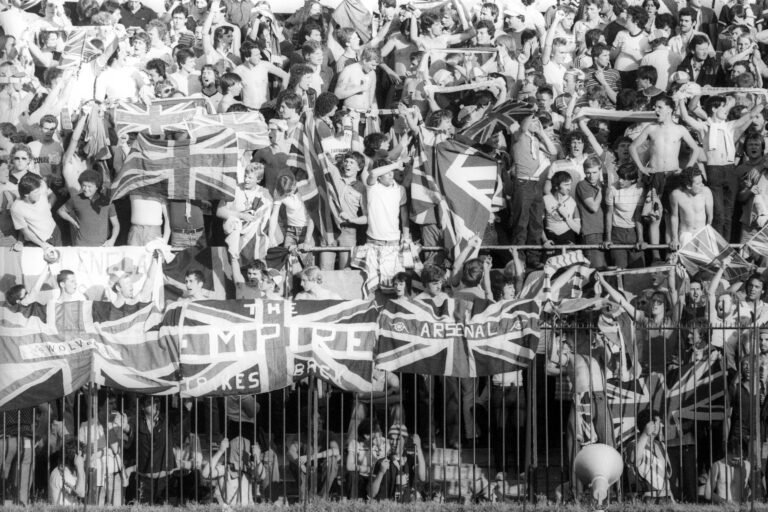 The fan is an intrinsic, irreplaceable part of sport. Without the humble observer, elite competition becomes an unrelenting trudge to the bottom line – a sterile pursuit of results and ever-diminishing (or increasing) numbers.